It’s guest post time and today I welcome back fellow writer and blogger, Simon Farnell who discusses diversity in writing. 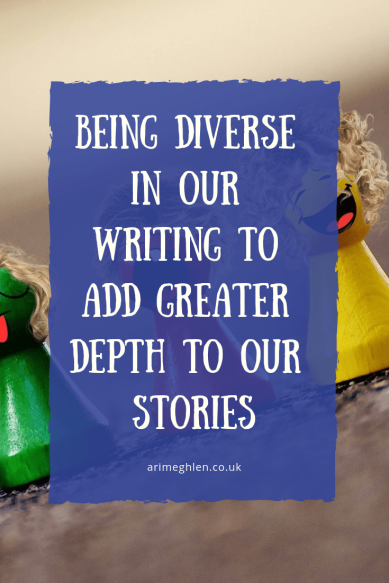 Before I start, I want to say thanks to Ari for letting me guest post, but onto business.

A while ago when I was planning out a story I noticed something that bothered me. My characters were not very diverse. Whether that’s because what I see every day are people from the same kind of background or whatever.

It bothered me that my first thought with them was to go white – straight. We cannot ignore the simple fact that we live in this day and age is societies that are diverse, whether its race, sexuality, personal opinion societies are rich with all kinds of diverse people.

For me as a writer, I have had to ask myself the hard question of whether or not I’m representing this diversity well enough in my stories.

I don’t know if you the writers reading this have found the same thing so I thought that this would be a great topic for Ari’s guest post.

If we start with something simple like people with differing opinions, it seems to be the case these days that where there is ‘difference’, people are put into ‘boxes’.

If you’re, say, a Brexit supporter you’re said to be some kind of anarchist if you’re not then it’s like you’re against democracy and some kind of leftie softie.

The reality is far different in both cases and there is this vast middle ground in between these two extremes.

This ‘boxing’ up of it is fine to start within a story but to continue it without exploring the middle ground of the opinion is where the strength of a story lies.

To use a recent analogy look at Thanos, his character has been so well thought out – portrayed as extreme mass genocidal maniac when the story digs down into this character he feels that what he’s doing is a real benefit to the universe and far from being unfeeling he actually has a great degree of respect for all life, which is why he feels he has to wipe out half of all life (it’s kind of ironic I know).

I don’t think for one moment that any kind of genocide is in any way the right way to go, but there are points where one actually empathises with him as he has lost everyone on his home planet and knows that if this had been done then his race would have survived.

Moving for universal extremes of opinion into something more down to Earth let’s look at other races here on Earth.

Take for example, if you wanted to write a Chinese character into a story – how could this be done with some authenticity? One aspect of the Chinese is they don’t like to lose face when realising this aspect of culture it could be possible that if you needed a character with that kind of personality trait they could be written in as a Chinese character.

Black Panther has been widely heralded as a great film that has done a great deal to capture African culture (sorry I keep going back to the Marvel universe).

In that story was a huge array of characters, of opinions mixed into the story to deliver something which was very special.

The story also succeeded in being very plausible and that for me at least is where I would have to work hard to actually have diverse characters that are plausible.

Then there’s the kind of the diversity that I find difficult, sexuality and gender identity. This is only from the point of view that I have to put myself in place of that person and try an accurately and respectfully represent their particular perspective.

Someone I know on Twitter recently made the point that didn’t know of any bi-sexual characters being written into stories. There were gay and sometimes transgender characters but not bi-sexual.

From this, it seems that societies perception of bi-sexuals is not really that endearing. All kinds of stereotypes, false assumptions about them seem to be around even from fairly recent times.

It would be so easy as writers to pick up these stereotypes and write them into a story and completely misrepresent them.

In the days of Star Trek: The Next Generation sexual diversity was very much ignored and even though this was an 80’s / 90’s series seen generally as a progressive forward thinking Sci-Fi show it wasn’t that progressive.

There was one episode wherein an alien symbiosis, a man became a woman and as such the main character that had fallen in love with the previous host couldn’t love the new one.

The line if I remember correctly was that “humans have a limited ability to love,” which I’m not sure was true or fair even for the time. There have been lots of suggestions about producers not wanting to explore those waters, but whatever – as writers now we can.

If you want to think about it in a different kind of way, it’s a bit like a marketing exercise to reach out to those with characters that you’re putting into your story – it makes sense.

Now comes the ‘but’… Turning a story into a tick box exercise of including a bi-sexual African that is a Brexit supporter isn’t necessarily going to do the job, neither is having most of the human race in your story – so where’s the balance?

This is something I have to work on in my writing and I’m still exploring this but please let me know – have you found similar issues in your writing? If you have overcome them or have any views on this then I would love to hear them!

My name is Simon Farnell, I’m an engineer, creator, free thinker and writer.

For far too long I had ideas and nowhere to put them for the world to see, that’s why Planet Simon was created.

I’m an experimenter, explorer and fascinated by the world around me and the people in it.

My exploration goes further than the known universe and expands out to universe’s I’ve created in my mind and put onto the creative canvas.

Big thanks to Simon for being today’s guest and sharing his thoughts on diversity in writing.  Please check out his links and if you have any questions, please leave them in the comment section below.