Today I welcome the lovely T.A Hernandez onto my blog, who is discussing the use of Social issues in fiction.

Should fictional stories include meaningful themes and messages or explore social issues?

Most would argue that a story is a form of entertainment, not a soapbox from which to preach to readers. But that doesn’t mean you can’t or shouldn’t include these things in your stories.

In fact, I’m here today to tell you why you should explore social issues in your stories, specifically in speculative fiction.

You might be surprised just how much depth and conflict you can add when you spend some time thinking about social issues and how they affect your setting, plot, and characters.

When you’re creating a world from scratch (as is so often the case in speculative fiction), you have about a million things to take into consideration with the ultimate goal of making the reader feel immersed in your story’s world.

One of the ways you can create a more immersive setting is to think about what social structures, systems, and problems might exist in your world.

I’m not saying you have to include all of these details in the story, but you should at least think about them.

Just as these things influence people’s lives in the real world, they’ll likely have some kind of impact on the people inhabiting your fictional one, including your characters.

Nothing Happens In A Vacuum

It’s so easy to get caught up in your story and the lives of your characters to the point that you forget everything else, but nothing happens in a vacuum, and your story shouldn’t take place in a vacuum, either.

Once you’ve given some thought to what social systems and issues exist in your fictional world, it’s time to consider how those things might interact with your plot and characters.

For example, the setting’s social structures may impact what kinds of resources are available to characters when they get into trouble. Existing social barriers might also act as plot barriers or obstacles and can be a great source of conflict for your characters.

Additionally, if your plot involves some serious changes to the world or a disruption of the status quo, consider how that’s going to affect not only your characters but also the world they live in.

Major plot events can have significant ramifications on the societies your characters belong to and interact with. If you just brush that aside or pretend consequences don’t exist, you’re doing a disservice to your story and your readers.

Besides, it can be really fascinating to explore those things in the story. Consequences are great, and guess what? They can often lead to even more conflict and higher stakes for your characters, which often makes for a more interesting and engaging story.

Sometimes, the social issue you want to explore is significant or even central to your story’s plot and/or characters. If that’s the case, you want readers to be a little more emotionally invested in that particular issue.

One of the ways you can do this is to give us a character who has a very personal struggle with that issue, and then showus how it impacts them.

Maybe it’s something that impacts your main character, in which case that might be what the entire story is about.

But you can also really flesh out your secondary characters and subplots by looking at the social structures, barriers, and problems in your story’s world, tying that to one of your characters, and then thinking about how that could impact the plot and other characters.

Nothing is Ever Black and White

While you’re writing about all these social issues, whether they have a parallel in the real world or not, it can be really easy to get caught up in your own opinion about the way things should be and then infuse that into your writing.

Before you know it, you’re pulling out your soapbox, climbing up on top of it, and preaching to your reader.

It’s okay to have an opinion about things and it’s okay to take a stance in a story, but nobody likes to be lectured or told exactly what to think and believe.

To avoid this, make sure you’re showing the nuances of the issue you’re trying to explore. Show us different sides, give us characters with different perspectives on the same topic, and show how each of them is right and wrong in different ways.

Nothing is ever black and white. If things were that simple, all the world’s problems could be easily solved. Your fictional world will feel a lot more real if it reflects that.

That’s all I have for you today. I hope you found it helpful. Feel free to leave a commen or reach out with questions if this is something you want to discuss further. 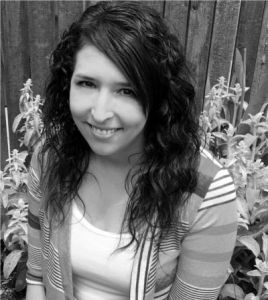 T.A. Hernandez gew up with her nose habitually stuck in a book and her mind constantly wandering to make-believe worlds full of magic and adventure.

She began writing stories after reading J.R.R. Tolkien’s The Lord of the Rings for the first time at age 10.

Thankfully, her writing has improved significantly since then, though she will happily admit that she has much more to learn and is looking forward to a long and exciting journey in her Quest to Tell Better Stories.

She is the proud mother of two girls and a college student working towards her degree in social work. She also enjoys drawing, reading, watching movies, riding her motorcycle, and making happy memories with her family and friends.

Nearly 30 years ago, the PEACE Project rose from the ruins of a global war to take power over a new America. Providing stability in exchange for absolute authority, the Project controls every aspect of citizens’ lives through each of its five units.

Raised in the Project since infancy, eighteen-year-old Zira has been trained as an assassin under the stern guidance of unit E-2’s Chairman Ryku.

After she makes a careless mistake on an assignment, the chairman partners her with Jared, the best operative in her unit. Their partnership transforms into friendship as they work together and learn to rely on each other.

But when misinformation causes a solo mission to backfire, Zira’s deepest loyalties and strongest relationships are tested in a place where even a hint of doubt can be perceived as treason.

The life she knows is falling apart, and nothing will ever look the same.

Thanks to Tanni for sharing her thoughts, if you have any questions please leave them in the comments below or visit her on her social media links.

7 thoughts on “Social Issues in Speculative Fiction by T.A Hernandez”