I am fortunate to have the wonderful Kim Chance, author of Keeper, back on this blog.  Check out her interview below.

1 – Have you always wanted to be a writer?

I feel kind of strange saying this, but no. Writing has been a part of my life for as long as I can remember.

I wrote some short stories and poetry as a kid, but most of my writing took the form of daily diaries and journals.

I still have a box full of them! Once digital journals became a thing (anyone remember LiveJournal?), I kept one all through high school and college.

Writing has always played a key role in helping me process the world and my feelings about it.

However, I never considered writing as a career until much later in life. In middle school and high school, my dream was to be a Broadway performer. I did a lot of theater, I was in choir, and I took private voice lessons.

Eventually, I decided that I wanted to go down a different path, so in college I was a Journalism major. I had big plans to become the next Barbara Walters. It wasn’t until I started taking print Journalism classes (for newspaper and magazine writing) that I realized just how much I loved to write.

I also had a professor who really encouraged me and was an excellent mentor. Were it not for her, I don’t think I’d ever have believed that writing was something I could do well or for a career. After I graduated college and got married, I ended up moving to a really small town in Virginia.

My husband was deployed at the time, and I was pretty lonely. I had an idea for a story in my head and decided to try my hand at writing it. At the time, I was just looking for a hobby, but once I started, I completely fell in love with the process. Writing fiction is what I was always meant to do. It just took me a while to figure it out!

2 – What inspires your writing?

So many things! I’m often inspired by music and art, and people-watching is a great way to get the creative juices flowing.

I love to sit in a public space and watch the people as they go by, to try and figure out what their story is.

My students are also a great source of inspiration to me, as well as my own personal experiences. Inspiration is everywhere, you just have to look for it!

A million years…or at least it feels that way! It took me three years to write Keeper, but there were lots of terrible drafts that came before it.

My current WIP is coming along much quicker, but still not as fast as I would like. I’m a bit of a perfectionist and I edit as I draft, so it takes me forever! I’m working on it, but I think I’m always going to be a slow drafter.

4 – What is the toughest criticism you’ve received as a writer?

The toughest criticism by far has come from readers. When my Keeper ARCs went out into the world, I wasn’t prepared for the feedback. I knew not everyone would like my book, but I was honestly surprised at how vocal some people can be when they don’t like something.

I welcome constructive criticism—I’ll never grow as an author without it—and I’ve gained some really helpful insight from certain negative reviews. However, that very first review that came in where the reader simply hated my book was incredibly tough to process.

I think as writers we do a lot to prepare ourselves for criticism and rejection from people in the business (agents, editors, publishing houses, etc.), but it’s a lot harder to prepare yourself for the same from readers.

I’m working on growing thicker skin though, and I’m actually grateful to the person who wrote that first negative review.

This whole process is a learning experience for me, and I want to do everything I can to continue growing and learning as an author.

That means taking the good with the bad. I used to think that it was smart to just not read reviews altogether, but I think there’s a lot to be gained from them. I’m definitely planning to read my reviews, but this time, I’ll just make sure I do so with a glass of wine and a chocolate bar in hand!

5 – What is the title (or working title) of your current manuscript and can you tell us a little bit about it? (this can be your book already out or one you are now working on)

My current WIP doesn’t have an official title, but I call it TBTWLKM, which stands for “The Book That Will Likely Kill Me.” Lol! It’s a mystery/thriller type story and it’s set in the 1920s. It’s basically a mash-up of The Great Gatsby and Dr. Jekyll & Mr. Hyde with a dash of Masque of the Red Death.

It’s a book that owns my heart, but I’m also terrified I’ll never be able to get it right. I guess time will tell! I also have a sequel to Keeper in the works, but no news on that yet!

6 – What is the hardest part of the writing process for you?

Drafting! I find it so challenging to get the words in my head down on paper! Plus, like I mentioned earlier, it takes me forever to write a draft.  I have tried so many things to speed up the process, but nothing helps. I’m just slow! But hey, slow and steady wins the race, right?

7 – What is your process for writing? (eg linear, by scenes, by random chapters, do you plan/are you a pantser etc)

I’m a pretty big plotter, but I do try to allow myself some liberty to pants when it comes to the scenes themselves.

I have to have a general idea of what each scene entails, but once I get into it, I just let the characters do the talking. I also write linearly. I’ve tried writing out of sequence and it just doesn’t work for me.

Oh gosh, it’s hard! I’ve got three kids and a million responsibilities, so at times finding time to write is like the quest for the holy grail. I have to be pretty organized to make it work, and sleep is usually the sacrificial lamb.

I need to get into a pretty deep headspace to write, so nighttime generally works best for me because there are no distractions. I usually pick 2-3 times a week where I’ll stay up super late to get words down on paper. I’m a zombie the next day, but it’s worth it!

9 – Would you ever want to see your book as a movie?

Absolutely! That would be amazing! I even have a dream cast in mind! I doubt it will ever happen, but I would totally die of happiness if it did! 🙂

10 – How do you market yourself and your brand?

Honestly, the biggest strategy I’ve had in terms of marketing is to just be myself. I want my followers to see the real me, not some fabricated version of me. I try to be open and honest and kind at all times. I also try to give back to the writing community as much as possible.

I truly have a heart for helping other writers and it makes me happy when I find opportunities to do so. My brand is all about being happy, friendly, and genuine because that’s how I like to see myself. I hope I’m doing a good job of conveying that!

11 – Tell us something you do to get the creativity flowing

I pour a nice hot cup of coffee and turn on my writing playlist! I find music incredibly inspiring and if I need a jumpstart, music is the way to go!

12 – What advice would you give to new writers?

Besides the usual “never give up” and “read as much as possible,” I would really recommend that young writers do some research on the craft of writing fiction. Writing a novel is so much more than just having a good idea, and there are so many things you need to know how to do.

Craft books are a good place to start, and I also recommend reading author interviews and listening to podcasts that discuss how to do certain things. Just like any career, there are certain skills and tools that a writer needs to have in their toolbox. The quicker you learn those, the better off you’ll be.

Also, don’t compare your writing journey to anyone else’s journey. It’s quite easy to get caught up in jealousy and bitterness, but it’s important to remember that someone else’s success is not a measurement of your failure. Your day will come. Keep fighting, keep trying, and always keep writing! 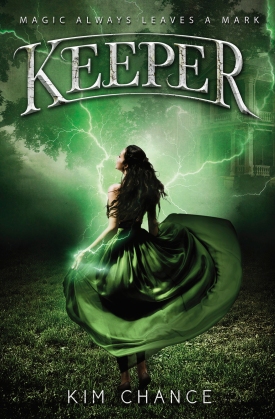 When a 200-year-old witch attacks her, sixteen-year-old bookworm Lainey Styles is determined to find a logical explanation. Even with the impossible staring her in the face, Lainey refuses to believe it—until she finds a photograph linking the witch to her dead mother.

After consulting a psychic, Lainey discovers that she, like her mother, is a Keeper: a witch with the exclusive ability to unlock and wield the Grimoire, a dangerous but powerful spellbook. But there’s a problem. The Grimoire has been stolen by a malevolent warlock who is desperate for a spell locked inside it—a spell that would allow him to siphon away the world’s magic.

With the help of her comic-book-loving best friend and an enigmatic but admittedly handsome street fighter, Lainey must leave her life of college prep and studying behind to prepare for the biggest test of all: stealing back the book.

Once again, big thanks to Kim for giving up some of her time to answer my interview questions.  Do leave her any questions or comments.

Please make sure to check out her social media links and the first chapter of her book, Keeper which is due for release on the 30 January 2018.

Also, if you missed it, check out her first visit to this blog with her article Back to the Bean, a writer’s letter to no

I am still wilting under this (what feels like) a never-ending chest infection.  I am hoping to be back for 2018 but who the hell knows!  Thanks for all your awesome comments both here and on my Facebook page, I appreciate them all 🙂